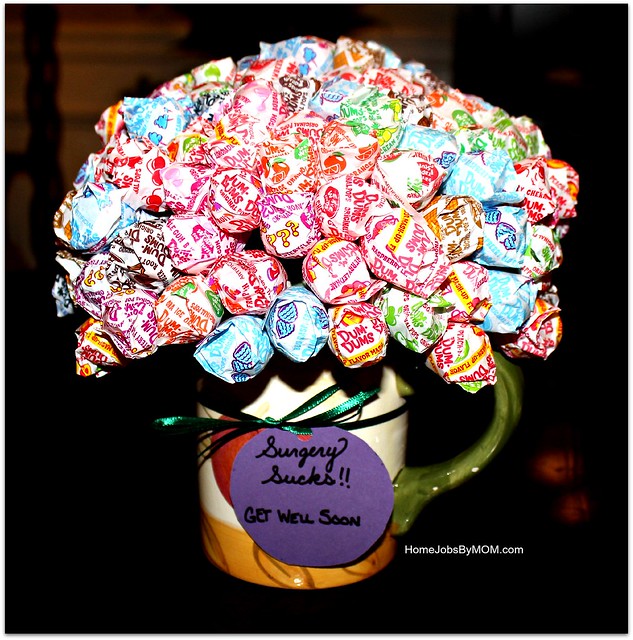 Shortly after the New Year while on a break from lunch my friend slipped on some ice. It did quite a bit of damage hurting her arm, breaking her femur, as well as damage to her pelvis. She has just now graduated to a cane and it’s been 3 months.

It’s crazy how just a fluke accident can cause so much damage. I feel for her not only because it’s an awful thing to go through but she has two small children as well one of them being an infant. Talk about hard times.

I never could catch up with her when she was in the hospital but once she was released I visited her at her house. I wanted to bring something and I thought a Dum Dum Bouquet was a cute idea. I already had a lot of Dum Dum’s on hand from my Valentine’s Day Teacher Jars and some Styrofoam from another project I am working on.

I took a nice, fairly large mug I had on hand place a floral Styrofoam cone in it upside down. I cut part of the tip of cone off so that only part of the Styrofoam was sticking out and was not wobbling all in the mug.

I then just started sticking in Dum Dum’s until it was a bouquet shaped. Didn’t take long at all. I topped it off with a little note and a ribbon. It was a hit with her two year old!