Things The Movies Don’t Tell You About Having A Baby

You are here: Home / Family / Baby Development / Things The Movies Don’t Tell You About Having A Baby 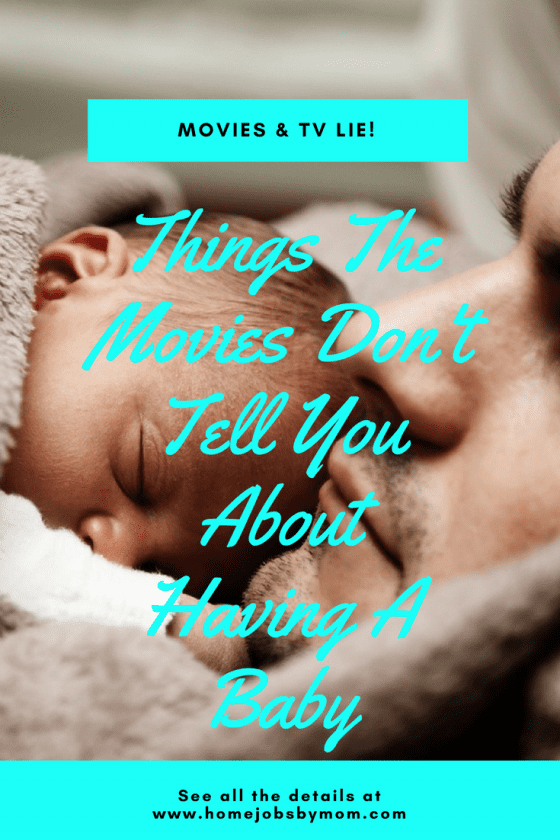 Most of us probably think that we’ve got a pretty good idea of what it’s like to have a baby. After all, it’s one of the most well-worn stories in the world. We’ve all seen hundreds of movies and TV shows all about what it’s like to look after a baby. However, if you actually talk to parents, you’ll find that those stories really don’t do the situation justice at all.

Having a baby is one of those experiences that you really can’t fully understand until you’re actually in the thick of it every single day. If you’re currently pregnant and you think that you’ve got a good understanding of what your first year of parenting is going to be like, you’re wrong. Here are a few things that the movies won’t tell you about having a baby.

The lack of sleep really gets to you

We all know that when you have a baby, you can kiss the idea of a full night’s sleep goodbye. From late night feeding to screaming tantrums. Sometimes your baby will even decide that three in the morning is the perfect time to play. You’re going to find yourself awake all night much more than you ever expected.

If you lived in the movies then all you really need is a cup of coffee and you’re good to go. Well, that’s not how things really are. The truth is that a lack of sleep can be incredibly unpleasant and even dangerous. It can leave you emotionally vulnerable not to mention potentially disoriented.

There’s nothing wrong with needing to reach out to your partner or some friends and family and just say that you’re beyond exhausted and you just need to take some time to get a solid night’s sleep. If you and your partner can alternate sleep patterns, that’s often one of the best ways of dealing with the situation.

Babies can be pretty gross

No one in the world is going to be more beautiful to you than your own baby. It will be hard not to look at them and see something genuinely perfect. That being said, babies are gross. That might sound hard, but there’s no way around it.

They can be seriously gross just as often as they can be cute and beautiful. Whether it’s dealing with diaper explosions, cradle cap, spit up, or any of the other strange things babies do, it’s okay to find yourself a little bit grossed out from time to time. Of course, that’s not going to stop you from finding your baby to be the single most perfect thing that has ever existed, just don’t feel bad if you don’t want to deal with the third diaper explosion of the day.

One of the best ways to make this easier is to do plenty of research on the kinds of things that you might have to deal with in the first year. That way you’re going to be able to be as prepared as possible for anything that your little bundle of joy can throw at you. Literally, at some point.

Watching them do nothing can be the best thing ever

Of course, the things that movies don’t tell you about having a baby aren’t all bad! In the movies, people are always doing something with babies. Whether they’re going for walks, going to baby groups, or whatever else, they’re almost always engaged in some kind of activity. Obviously, that’s the stuff they’re going to show because it would be boring to watch otherwise.

This doesn’t really capture the strange beauty of one of the best things about having a baby: just getting to watch them do nothing. The reality is that babies don’t really do much but basic body functions at first. They lie there, they gurgle a bit, the give you a big smile, and sometimes that can be it for hours.

What movies don’t tell you is just how enthralling that can be. You’ll often find that you’re so consumed with love for your baby that just watching them do nothing can be the best part of your day. I have about a billion pictures of my son just sleeping.

It can get lonely

A lot of people would have you believe that once you have a baby, you’re never going to be lonely ever again since you’re going to have someone to spend all of your time with. However, there’s a BIG difference between spending time with another adult and spending time with a baby.

As wonderful as they are, it’s not the same as being able to have an actual conversation with someone. Don’t feel ashamed if you feel as though you really need to spend some time with people who can respond to the things that you say.

Make sure that you’re getting out into the world. Go and see friends, visit family members, and maybe even join some groups. One of the best things about baby groups is that not only does it give you the chance to do some fun activities with your little one, but it can help you meet and talk to other people who are going through many of the same things that you’re dealing with. You really can’t underestimate the value of having someone to talk to.

You’re going to hate them a little bit sometimes

This might sound like the worst thing that a parent could possibly do but ask anyone who’s ever had a baby, and they will tell you that there were moments when they really hated their child. Here’s the thing: babies are unreasonable. In fact, they’re kind of jerks.

Of course, that’s not their fault, it’s how they’re wired. It’s the reason that they survive. They only care about their own needs and the only way that they have to communicate those needs is through yelling and screaming. Deep down you understand that, and you’re always going to have patience with them. But that’s not going to stop you feeling angry and stressed when they’ve been crying for hours and just won’t stop.

The reality of parenting is that it’s much harder than anyone could ever possibly describe. That’s why you need to remember that it’s okay for you to a step back and take a break. If your child is screaming and won’t stop, there’s nothing wrong with needing to put them down in their crib and just spend some time in another room while you cool down. It’s not going to do them any harm if you just make yourself a quick cup of tea and cry to relax before going back into the thick of it.

While movies often don’t show you just how hard and tiring parenting can really be, they also can’t fully show the sheer levels of euphoria that you will feel as well. The reality is that parenting is one of those things that has to be lived to be fully understood. You might hear people talk about how you’ll never love anything like you love your own child, but until you’re feeling that way yourself, you’ll never fully understand what they mean.

Home Equity Credit Line – Is It Right For Your Family?
Next Post: Trying to Plan Out a Home Addition? Consider These 4 Tips For Success